To NaNo, or not to NaNo

It's that time of year again. NaNoWriMo.
NaNo.
WriMo. 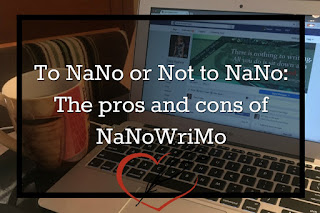 A word that strikes fear and excitement into the hearts and minds of hundreds of thousands of writers and authors.
A time when writers from all around the world put themselves through the torture of writing out 50,000 words for a novel. It can be a new novel or a novel that's already in progress. Either way, the main premise is to add 50,000 words to the novel during the month of November.
People start their planning weeks or even months in advance. Many of us stay up until the stroke of midnight on Halloween, fuel on hand so we can take to the keyboards by the stroke of 12:01 AM November 1st.
It's safe to say NaNoWriMo is a fixture in my life. When I met my husband, I was already a two-time veteran. And this past year, I've expanded to participate in Camp NaNoWriMo during the spring (a similar exercise, but instead of a standard goal of 50,000 words you can set your own goal).

To NaNo or not to NaNo, the pros and cons of NaNoWriMo

NaNoWriMo is almost a given for me. After over a decade, I'm not sure I can imagine what November would be like without it. Yet every year, I have to talk myself back through the pros and cons. And this year is no different. So here they are.
Pros
NaNoWriMo helps build a strong writing habit. The best way to win is to write everyday. And for many people, this is one of the hardest habits to stick to. Schedules and writer's block are just two of the many things that can keep someone from writing on a daily basis.
The prizes can be pretty cool. Most of the time, the prizes for winning include free or discounted software or memberships designed for writers. Including word processors, manuscript critiques, and editing software. For most writers, this is huge.
Support is everywhere and plentiful. And I do mean everywhere. NaNoWriMo sends out pep talks, other writers send out pep talks. There are groups of people in almost any region or city where you can meet up in person for encouragement and support. Or chat online with writers and participants from around the globe. Remember when I told you of the top reasons to love the writing community? They are magnified during NaNoWriMo.
Millions of people have a book inside them: an idea for a novel, a memoir, or a how-to guide. But millions of people also have plenty of reasons to never write. Jobs, schedules, children, fear of rejection, lack of training. NaNoWriMo gives these would-be authors the opportunity to say go for it.
Cons
NaNoWriMo gives you the push and drive to get 50,000 words written, but they aren't always pretty words. In fact, many times the works I finish during NaNoWriMo are the hardest to edit. Redundant phrases, forgotten settings, name-changes mid-scene. The post-written NaNoWriMo novels are a nightmare. And I'm not the only one who thinks so. Plenty of blogs are out there complaining about a flood of subpar NaNoNovels hitting the market. Publishers and agencies have talked about a flood of submissions in December of poor-quality novels seeking representation. In most cases, it's not because the story was bad, just that fast does not always mean good. (– Although, this isn't usually a problem for seasoned writers, regardless if they've done NaNo in the past or not. But for first-time authors, this is a big hurdle).
Because editing rushed novels can be a nightmare, I have over a dozen sitting unfinished and unpublished. It's just become easier for me to start a new story than it is for me to tackle the endless revisions and rewrites that these will require.
Whether you're a seasoned writer who does this for a living, or a professional in another field tackling that novel sitting on your back for the first time, time gets away from you during NaNoWriMo. I'm serious. If you thought juggling your schedule and trying to make ends meet was hard, November it will become a nightmare. November is my worst time of the year when it comes to keeping everything juggled and not getting overwhelmed by it all.